In the U.S. and internationally, a set of mostly small, community-based groups is quietly undertaking new approaches to philanthropy that put power directly in the hands of people with the kind of lived experiences essential to making wiser decisions about who gets funds and under what criteria. From giving circles to crowdfunding to participatory grantmaking, the common lesson we are learning from these experiments is that trust-based grantmaking is an essential approach to strengthening communities and working for durable change. They all rest on an idea, often credited to author Stephen Covey and applied to social movements by poet and organizer Adrienne Maree Brown, that “change moves at the speed of trust.”

Not only do these practices recognize the opportunity created by shifting power and deepening trust, they also challenge and dismantle the notion that people with money know best how to spend it. This myth—that wealth and whiteness equate to wisdom—is a foundation of foundations.

Earlier this year, during a talk with the City Club, I spoke about philanthropy as “a debt that is owed to society.” I mean this literally. As Keeanga-Yamahtta Taylor argues in her recent book on predatory real estate practices, discrimination and racialized economic inequity across the country and in Cleveland are a direct result of cynical and exploitative public-private partnerships that benefited the elite few at the expense of entire communities of people working hard to enter the so-called middle class. This signals to us that in our imaginings, the colossal—and widening—wealth gaps in Cleveland will persist unless we keep racial justice at the top of our agenda and distribute money through our grantmaking like we are paying our debt. (Yes, this is also the dialect of reparations.) Money is not generated by an individual; it is created collectively. The Foundation’s wealth belongs not to my grandfather or his descendants but to the much broader community. 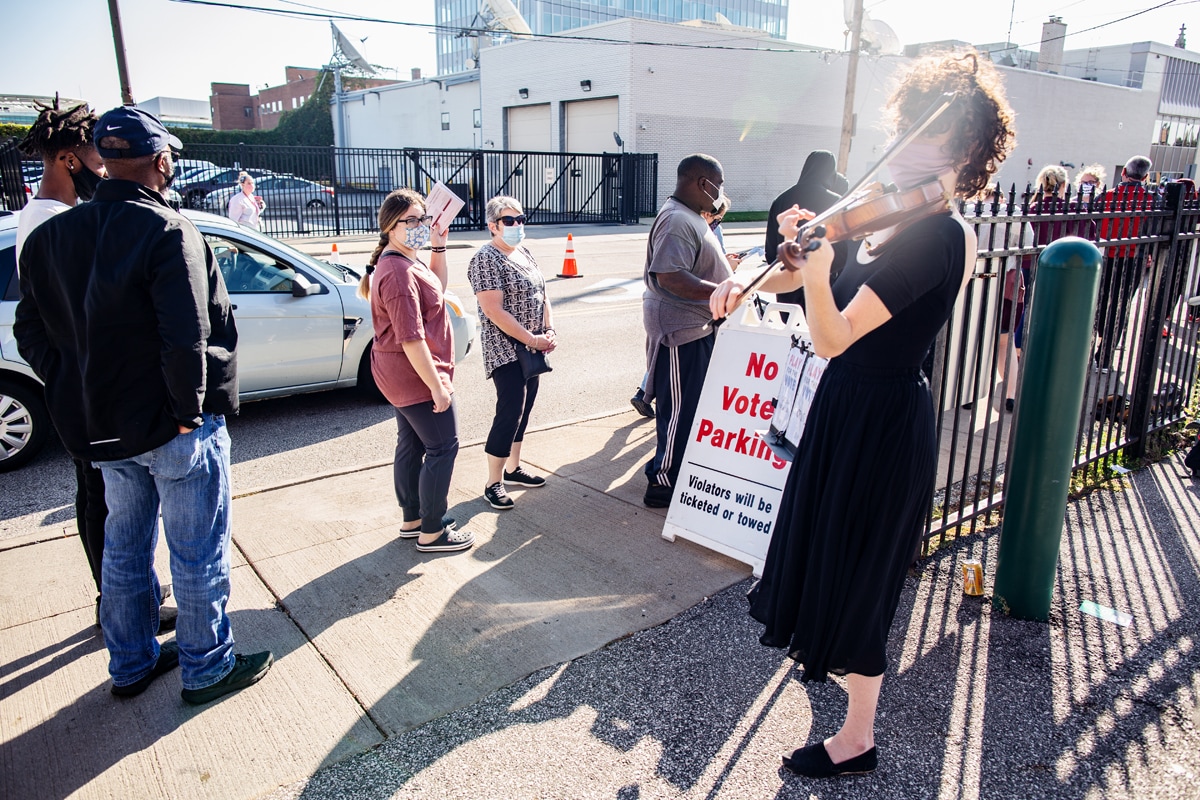 Cleveland, OH—Early voting at the Cuyahoga County Board of Elections, including violin performance by Ariel Clayton Karis.

I believe a big step to repair the harm of extraction—amassing great wealth at someone else’s expense—is to address constitutional philanthropic fragility. This fragility parallels white fragility: a group with privilege and power refusing to reflect on how history and power dynamics perpetuate the inequality from which they comfortably benefit. The word “fragility” comes from the Latin fragilitatem meaning “brittle, easily broken.” Brittle materials absorb relatively little energy—they are isolated from vital resources and the life-giving exchanges of nourishment that keep an organism healthy. At the center of philanthropy’s fragility is perhaps a similar lack of porousness, a resistance to a critical exchange of ideas based in the need to maintain power.

Perhaps nothing in the natural world illustrates this as well as the Pando Forest in a corner of Utah’s Fishlake National Forest. Thousands of genetically identical quaking aspen trees are united through a massive, shared underground root structure; the roughly 13 million pounds of biomass survives collaboratively by exchanging and widely distributing the resources it collects from the sun, air, and soil. I believe that Cleveland’s future similarly depends on this type of critical exchange. Our ability as a foundation to contribute to a just Cleveland requires that we dissolve brittle, inflexible relational dynamics between the Foundation and the people who live in this city—the people who are leading from the roots.

What issues of consequence can be addressed by any foundation acting alone? None. If fragility is a symptom of our failure to recognize our connectivity, then there’s only one way forward: through collaboration. Collaboration demands porousness that leads to the exchange of ideas as well as the ability to hear and accept criticism. Collaboration requires that we honor our connectivity through trust. Visionary examples of this kind of collaboration within philanthropy include: the Greater Cleveland COVID-19 Rapid Response Fund, the Ohio Transformation Fund, the much older Fund for Our Economic Future, and the new, game-changing Ohio Climate Justice Fund. These philanthropic innovations were made possible because a group of people said “Yes!” to incorporating community feedback and focused on breaking down barriers to delivering immediate, impactful action.

The Foundation’s vision of justice, one that delivers security of health, wealth, and mobility, is not only within reach but is the right application of the knowledge we’ve acquired in the last year. The pandemic exposed too many severe fault lines and rot in our country’s infrastructure—a woefully inadequate public health system; grotesque inequities across race, class and gender; the portion of elected officials and citizens who will use science and evidence to make critically important public choices and those who will not; the proportion of the country that believes that government can and should act to address the pressing issues we face relative to those with a deep suspicion that it should not and cannot. And so forth. At the Gund Foundation, we’re asking: How can philanthropy help heal these fault lines and contribute resolutions to the urgent challenges we face that are just and equitable?

We’re committing ourselves to making the Gund Foundation a liberated space in which we create this kind of healing, forward motion together—from acknowledging how systemic racism shaped our city, to enshrining anti-racist practices at every level of our work. To challenge the status quo of wealth and whiteness, we must cultivate a shared vision of abolition with the energetic people organizing Cleveland’s most strategic, sustainable and transformative work. For us, this includes aligning investments with long-term, mission-focused work.

Poet Adrienne Rich, in her work “What Kinds of Times Are These,” responds to a question, posed by playwright Bertolt Brecht about the pains of living in a nation of conflict. Reframing our landscapes of possibility, both politically and socially, Rich prods readers to consider the sources of our discomfort and our nourishment.

so why do I tell you
anything? Because you still listen,
because in times like these
to have you listen at all, it’s necessary
to talk about trees. 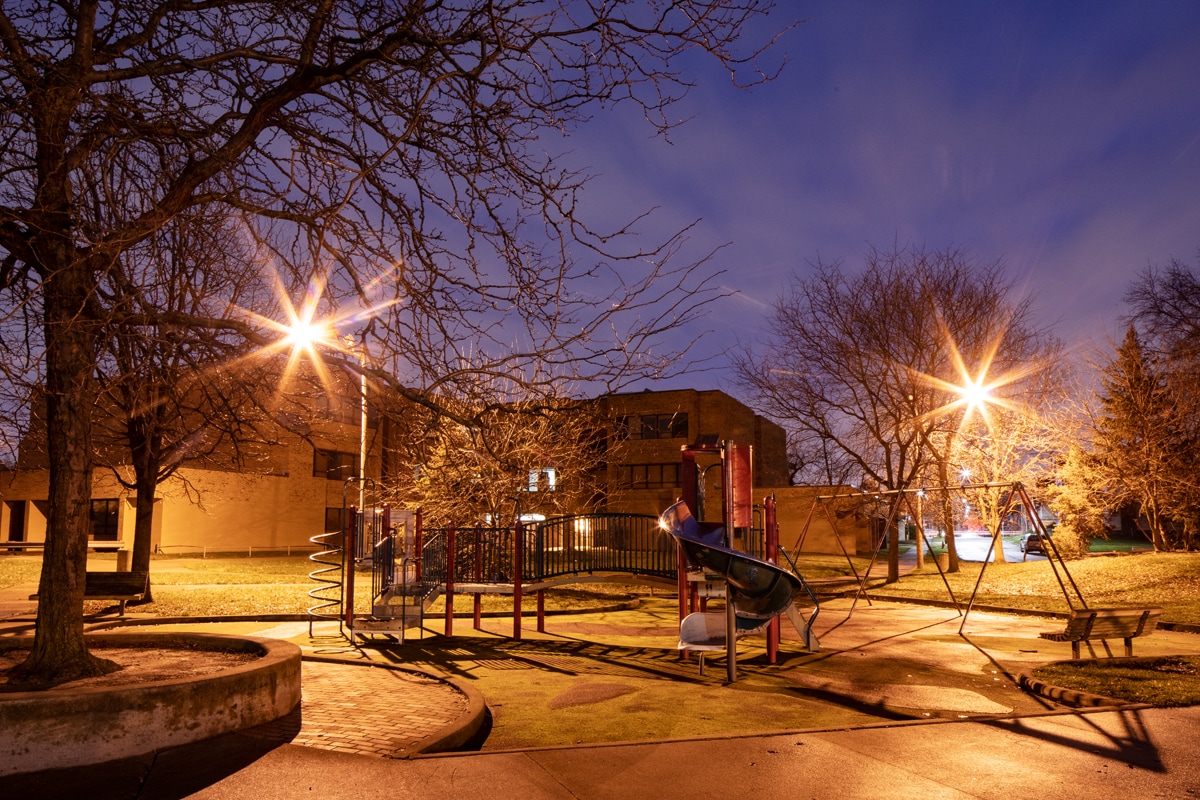 Cudell Commons Park, Cleveland, OH—Site where 12-year-old Tamir Rice was killed by Cleveland Police Officer Timothy Loehmann November 2014. The gazebo near which he was killed was removed and relocated to Chicago. In January 2021, the U.S. Department of Justice announced it would not charge Loehmann or his partner Frank Garmback.

Artists, like Rich and this year’s Gund Foundation annual report photographer Brian Palmer, help us see a different future. To really bring about collective healing, we have to look at the enduring problem of economic inequality with the artist’s approach: first, be porous; listen to the world. Next, interrogate and educate our intuition. Ask ourselves, like the aspen trees, what nourishment serves our collective growth. And, eventually, imagine together something that wasn’t there before. This is our devotional act for the city: reimagining justice starting at our shared roots.